Evensong is one of the traditional Anglican offices. Essentially it is a reflective, contemplative service using the psalms, scripture and prayer as its main content. Unlike the Eucharist there is no provision for a sermon. The

origins of Evensong (and Matins) are a conflation of the medieval “monastic hours” of prayer.

Morning prayer (Matins) and evening prayer (Evensong) are both, according to the Book of Common Prayer, to be said daily throughout the year.

In most contemporary prayer books throughout the Anglican Communion, morning and evening prayer appear in modern language. A set of daily offices is also provided which continue a systematic reading of the scripture and psalms.

Taize Prayer
Taizé is a monastic community located in Taizé, France, founded in the 1940s by a Swiss named Roger Louis Schütz-Marsauche, familiarly called Brother Roger. The “brothers” of Taizé have taken a vow of celibacy and are committed to a lifetime of simplicity, service, and community. There is an ecumenical emphasis at Taizé, as expressed in their official website, which says the community “wants its life to be a sign of reconciliation between divided Christians and between separated peoples.”

Taizé worship is being incorporated in a wide variety of churches, Protestant and Catholic, and its pattern of devotion is emulated in other monastic communities around the world.

A Taizé worship service involves sung and chanted prayers, meditation, a period of silence, liturgical readings, and icons. There is no preaching. The style of prayer practiced at Taizé has attracted many worshipers from around the globe and from many different denominations. The prayers consist of short chants, repeated again and again. This repetition of a short text of scripture or spiritual writing combined with the silence provides for a very atmospheric and contemplative experience

A prayer chain is a way for people to act on God’s command to love one another. Many people cannot engage directly in ministry but we can all pray. Many are older or ill themselves but can take the time to help others and to make their time and suffering valuable. Prayer is a way for us to reach out of ourselves, to put aside our loneliness and pain for the sake of another. 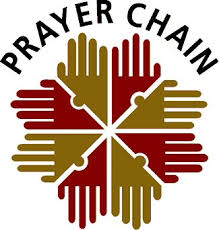 At the various services throughout the week we remember those who have died and we pray for those who are sick. These names are also printed in our weekly bulletin so that members of our community can pray for the sick and the dying at home. Out of respect and privacy we only ever include the first names of prayer requests.
If you would like us to pray for someone you can contact the parish office on
6223 1795 or contact Fr. David on his e-mail fatherdavid@bigpond.com