Music is central to the liturgical life of the parish. The High Mass, Eucharist with Hymns at Saint Raphael’s Fern Tree, Choral Evensong, Evensong and Benediction, Taizé are all enriched by beautifully, well-chosen instrumental, choral and congregational music. This aspect of our life is paralleled by the quiet, contemplative Masses with no music and periods of silence.

Music is important to liturgy in the catholic tradition. Congregational singing enhances the sense of community, instrumental music allows for periods of reflection, choral music allows the listeners to enter into the mystery of God.

Music encourages worship ’in spirit and in truth.’

THE DIRECTOR OF MUSIC AND ORGANIST

The musical programme is led by the Director of Music who is also the principal organist.

Anne Morgan has been involved in the musical life of the parish for over twenty years and has helped shape the musical programme since the present choir was formed in 2003. The choir was re-formed at that time under the direction of Steven Morris, with Anne as its organist. Anne took over the choir when Steven was appointed to a school in Queensland.

Anne studied under organ teachers Norman Johnstone and David Rumsey at the NSW State Conservatorium of Music where she completed the Diploma in Church Music course. She also holds a Bachelor of Education from the University of Tasmania and holds a Licentiate Diploma from the Trinity College of Music, London.

Anne came to Tasmania to take up a position in the Music Department at the Launceston Grammar School, after which she moved to Hobart to take on the role of Head of Music at Saint Michael’s Collegiate School and then Head of the Faculty of the Arts.

The Parish Council has set aside to provide lessons and music for an Organ Scholar.

An organ scholar needs to have keyboard skills to the level of Grade 6 AMEB as necessary prior learning. The scholar would not only receive training in playing the organ but also in the essential tasks of the church organist: accompaniment of hymns and psalms, choice of organ music for before and after a service according to the season of the church year and an

On the Sundays that the Parish Choir does not sing at the High Mass there is a roster ofcantors who lead the singing of the Mass Setting and the Responsorial Psalm. A cantor will often sing an Introit and an anthem during the administration of the Sacrament. The cantors are members of the parish choir.

THE CHOIRS OF ALL SAINTS

All Saints has had a fine music tradition that spans many decades. The choral tradition  began in 1895. The present choir was formed in 2000 after some years when the musical life had been in flux. Steven Morris, at the time Head of Choral Music at the Hutchins School, directed the choir. The organist was Anne Morgan who continues as the Director of Music and Organist. 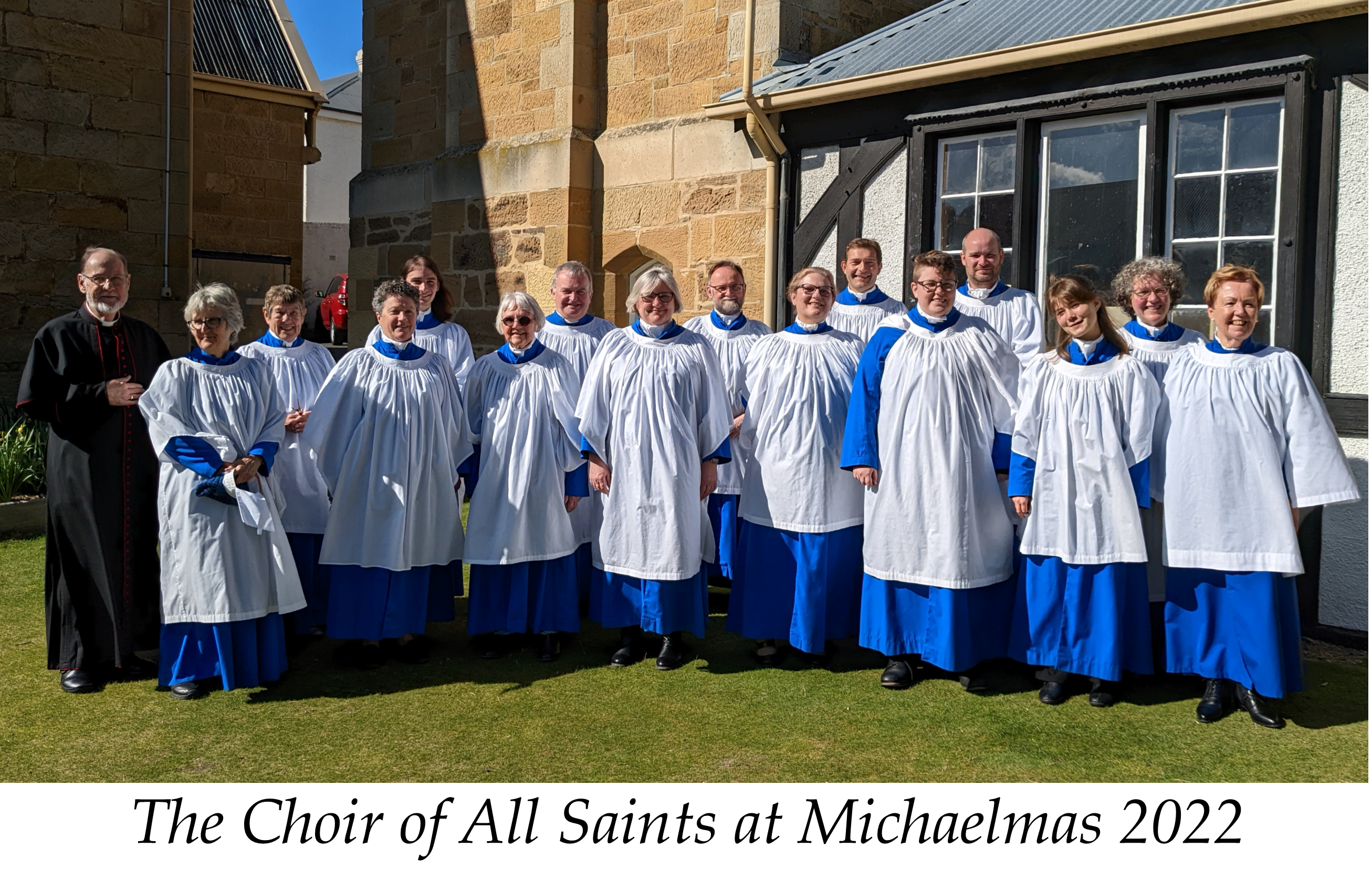 The Parish choir comprises a group of some sixteen singers, all of whom offer their services in a voluntary capacity. Their repertoire is taken from the music of the sixteenth century to the present day. Typically, the choir sings music for four to six parts and occasionally eight parts, both a capella and accompanied. Composers represented include Byrd, Victoria, Viadana, Hassler, Haydn, Mozart, Saint-Saëns, Fauré, Elgar, Bruckner, Stanford, Harris, Tavener, Gjeilo and many others.

The choir sings for Choral Evensong on the second Sunday of the month. Choral settings of the Preces and Responses, Magnificat and Nunc Dimittis, together with an Introit and anthem are sung. Here, the Office of Evensong is sung with no sermon. The emphasis is on the offering of the prayer of the Church.

The choir also sings at the High Mass on the fourth Sunday morning of the month. A choral setting of the Ordinary of the Mass, together with an Introit, Communion Motet and psalm form the musical offering.

Special feature of the worship and musical life has been the singing of the ‘Requiem’ by Gabriel Fauré at the Solemn Requiem for the Commemoration of All Souls. During Advent the traditional Advent Carols in Procession is another highlight.

Special services are also sung in the period from Advent Sunday to Christmas Day and Palm Sunday to Easter Day.

Evensong and Benediction is sung on the first Sunday evening of each month. This group is an a capella group formed from members of the parish choir. The Office is sung with the Preces and Responses to the ferial setting, the psalm to Anglican chant, the Magnificat and Nunc Dimittis to faux bourdon settings, and the Benediction hymns and chants to plainsong.

The Office of Compline, the last Office of the Day in the cycle of Monastic daily prayer. The Compline Choir sings the office three times per year and rehearses only in the month leading up to each service. The choir is an a capella group comprising some members of the parish choir and additional singers according to the musical requirements. While music of the nineteenth and twentieth centuries feature in the repertoire, the emphasis is on music of the sixteenth and seventeenth centuries.

Contact the Director of Music, Anne Morgan,
through the Administrative Assistant at All Saints:
assistant@allsaints-southhobart.org.au

The Director of Music will contact you to arrange a meeting.