The Organ by Bishop and Starr

The original organ, built by Bishop and Starr of London, was installed in All Saints Church in 1862, and comprised two Manuals and Pedals. It was originally situated in an enclosed chamber on the liturgical north side of the chancel, a space which is now the Sacristy.

In 1920 the organ was re-built by George Fincham and Son, of Melbourne.  A new action replaced the original and new ranks of pipes were added. The Organ was again re-built in 1963. This time the Launceston firm Davis and Laurie installed a new action, and added two more ranks of pipes.

The following is the specification after the 1963 refurbishment and relocation. 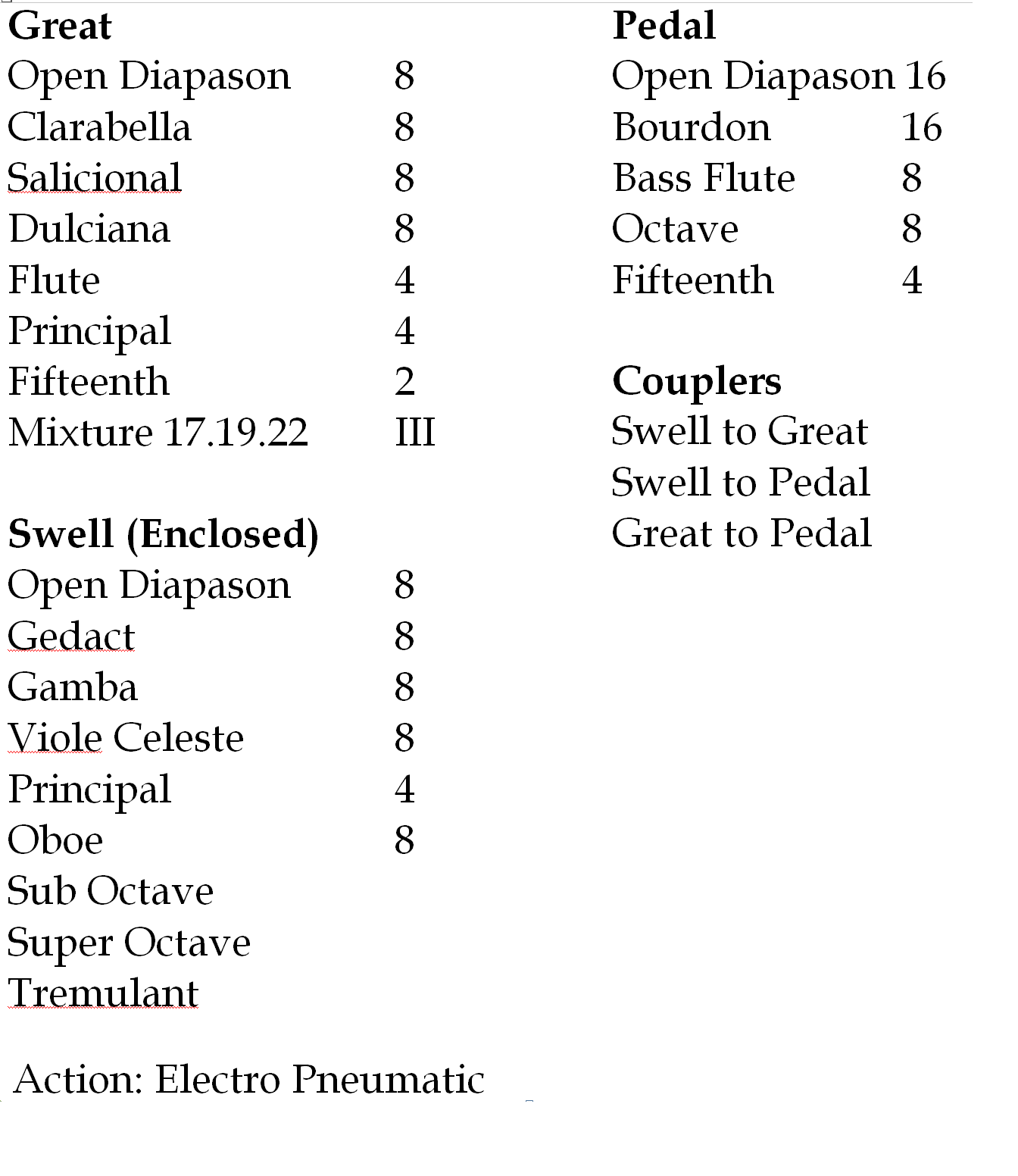 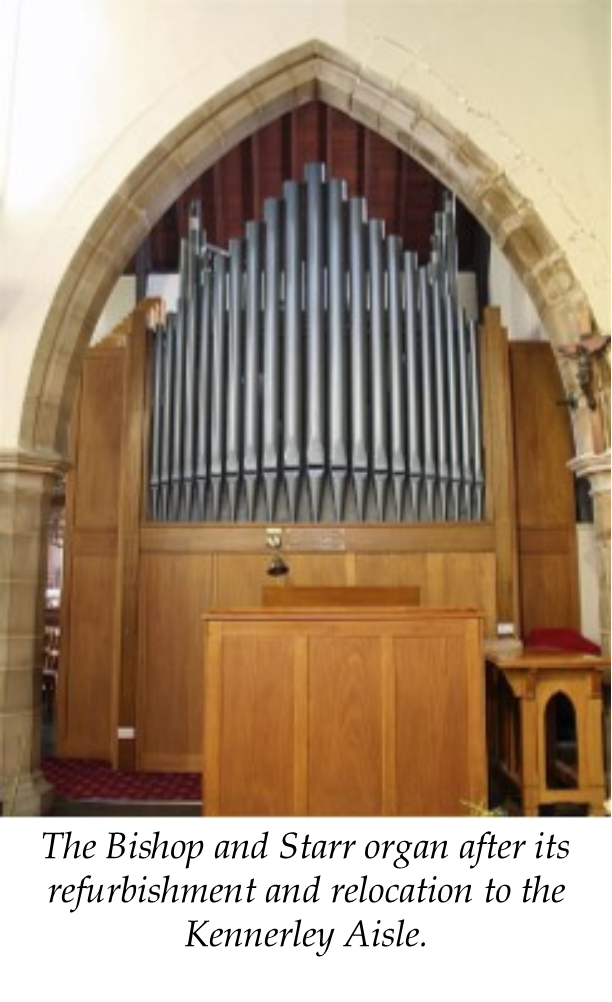 In 1974 the instrument was moved to its present location in the North Aisle by Hobart firm of Long, Langlois and Johnstone. New casing was provided and the console was rebuilt and detached.

By 2018 it was clear that further refurbishment of the existing instrument was not an option, given the financial resources of the parish at the time and its ability to support the congregational singing. Parish Council took the decision to replace the existing organ with a redundant organ in Trinity Uniting Church in Launceston.

It is gratifying to know that some ranks of pipes from the original organ have been incorporated into the rebuilt organ in The Hutchins School’s Chapel of Saint Thomas at Sandy Bay. 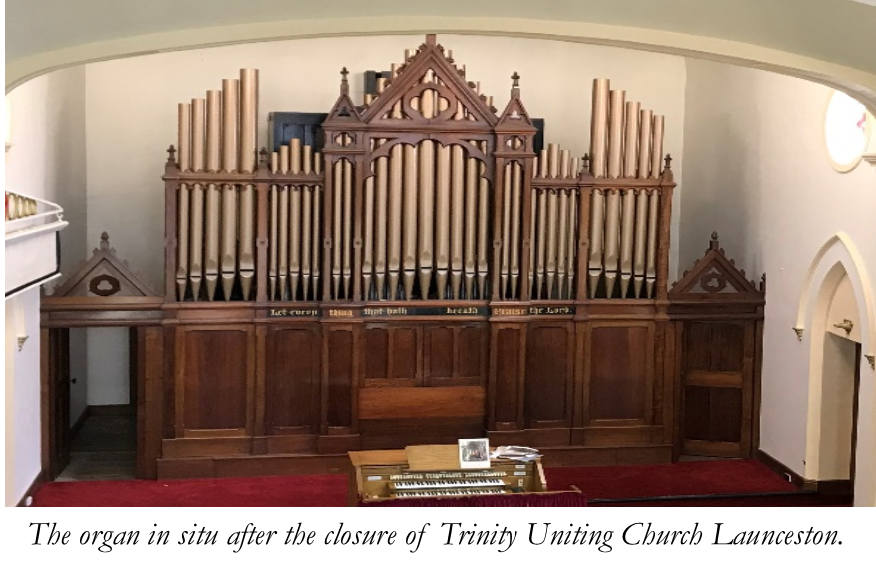 This instrument was built by George Fincham of Melbourne in 1880, originally for the Wesleyan Methodist Church in Paterson Street Launceston where it served the musical life of that congregation for some twenty years. In 1904 the organ was re-located and re-built in the Margaret Street Methodist Church in Launceston (later to become Trinity Uniting Church) when a larger instrument to serve its music tradition. 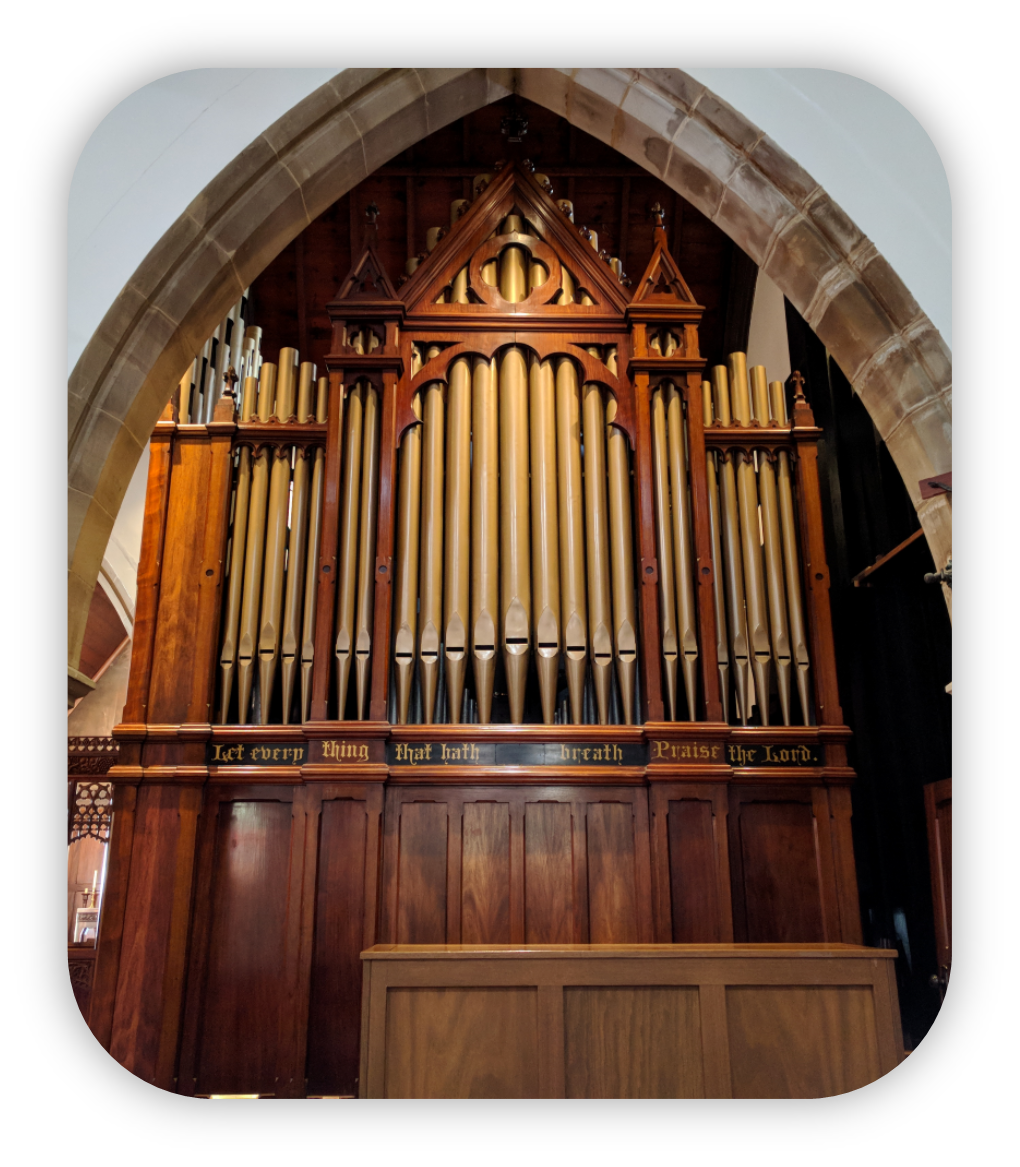 The organ was enlarged in 1920, and was rebuilt in 1975 with attention to the action and console, with further work undertaken in 1986.

The organ served Trinity Uniting Church parish well until the church closed its doors in the latter part of 2017. As part of the ongoing restoration project of All Saints Church, the organ was acquired by All Saints from those who are to re-develop the Trinity site.

The re-location of the organ from Launceston to 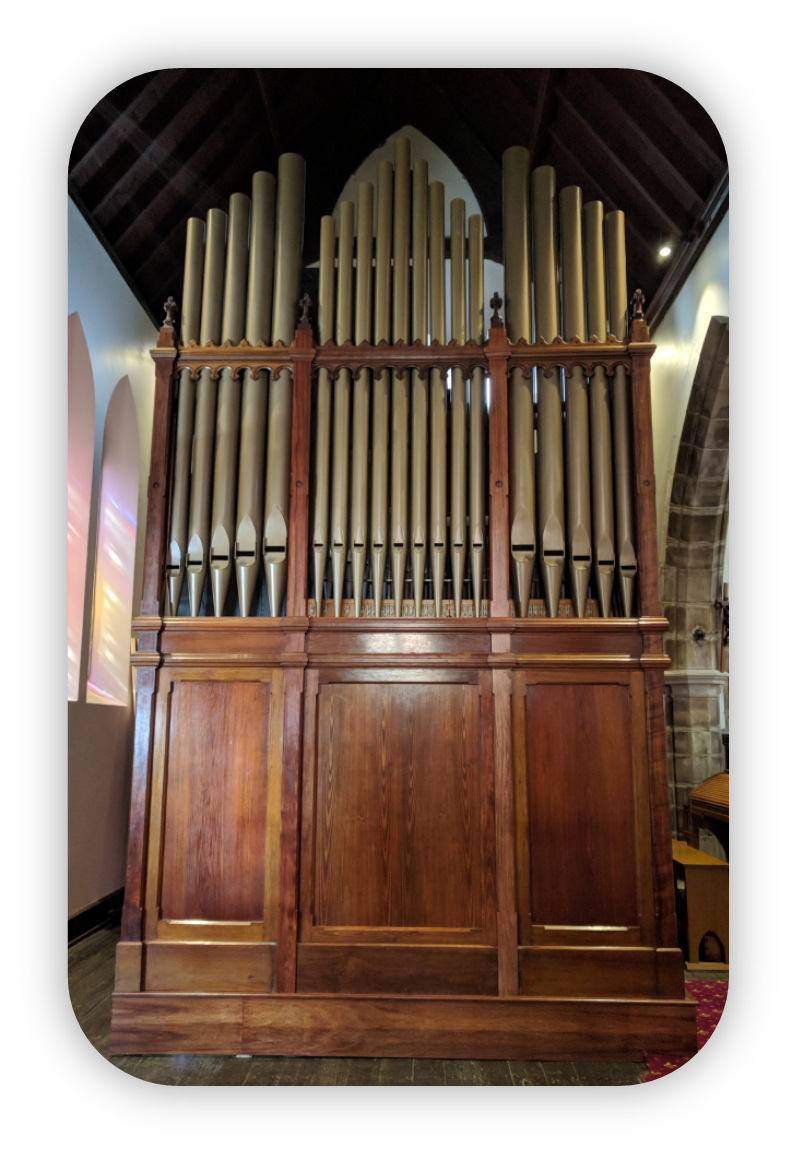 South Hobart was placed in the hands of Australian Pipe Organs who had maintained the instrument since the 1986 work and who had also cared for the former organ in All Saints. Some careful re-design was necessary to ensure that the organ covered a similar footprint to the former instrument; the façade at the front is restored to what might was its original state (see left) and the remaining Open No.1 pipes from the 1920 rebuild have been relocated in new casework on the west side of the instrument (see right). New panelling has been built for the front and side as necessary to bring unity to the instrument.

On 1 November 2018, The Feast of All Saints, another milestone in the Restoration of the fabric of All Saints Church and in life of the parish was celebrated. The re-furbished organ was dedicated to ‘the greater Glory of God and in in loving memory of Ralph and Lillian Sangster’ from whose bequest has made this work possible.

The following is the specification of the instrument as it stands to day in All Saints Church. 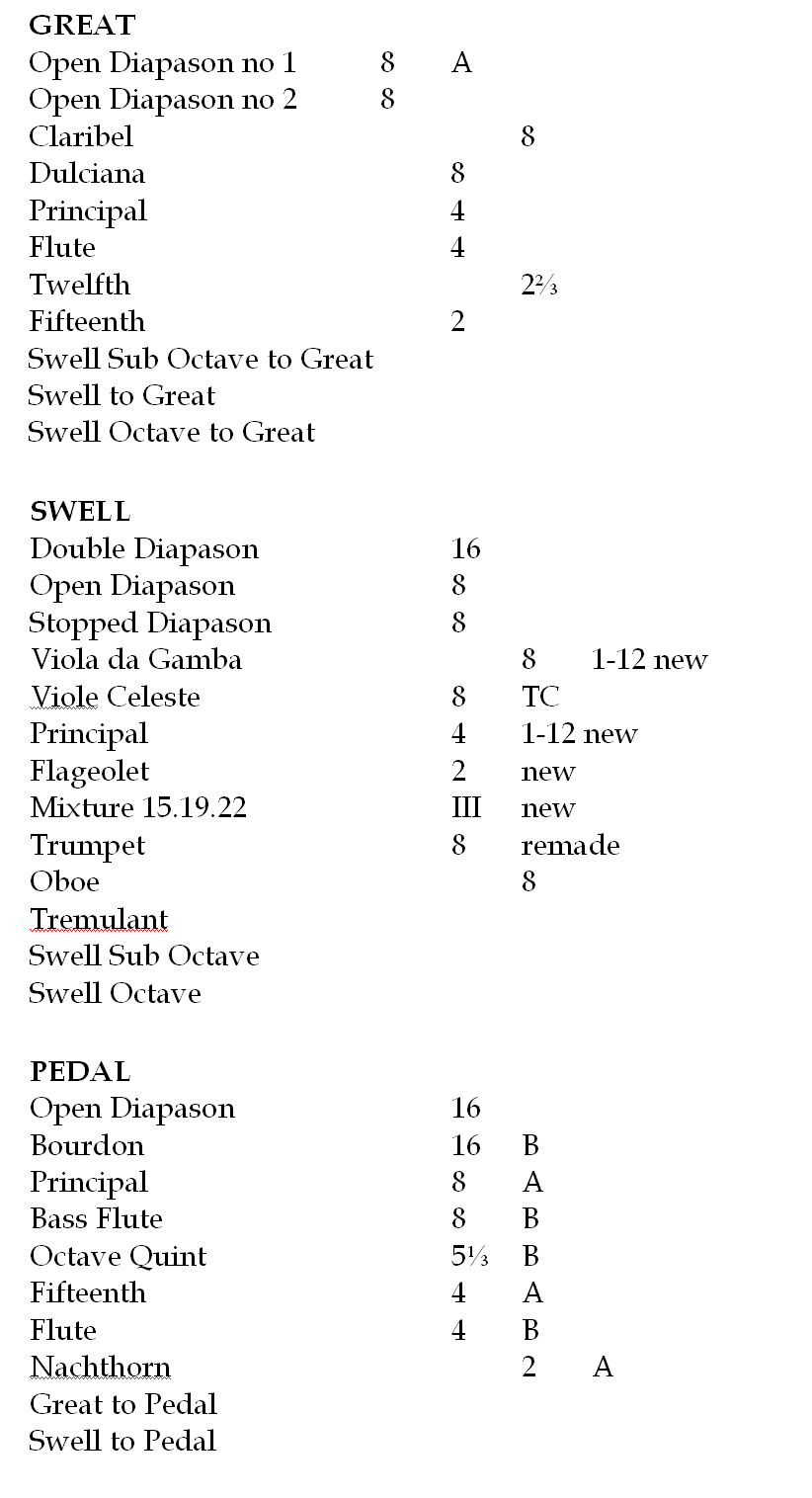